One of the greatest stories in the history of American sports car racing. What a couple of 18 yrs old kids by the name of Lance Reventlow and Bruce Kessler were able to accomplish in American and International Racing Circles is nothing short of amazing!

Scarab F1 had captured the imaginations of racing fans across America and around the world. The success of the Scarab sports-racers and the romance of a small team of Americans from southern California taking on the best of European constructors with an immaculately constructed – and the construction and finishing standards of the Scarabs were an order of magnitude beyond those seen on European GP cars.

A tribute to the imagination and determination of one of history’s great characters, Lance Reventlow, and the talented team he brought together in Venice, California. Its appearance is electric, a handsome blending of form and function that is as innately pleasing as Lance Reventlow’s many beautiful women companions. Its intricate desmodromic valve dual overhead camshaft four-cylinder engine may be the highest development of an American racing tradition.

The Scarab F1 first appearing to immense interest and fascination at Monaco. Reventlow offered Stirling Moss (driving a mid-engined Lotus 18 in the race) a chance to drive the Scarab. If anything Moss’s talents behind the wheel masked the front-engine Scarab’s numerous shortcomings but even freshly completed and barely shaken down both Reventlow and Daigh would have been competitive with 1959 qualifying times in the season for which the Scarab F1 was designed.

This Scarab, GP-2, is the only one to race at both the United States Grand Prix and the Gran Prix of Monaco. The Scarabs have become more sought after than ever as the remaining important cars are locked away in serious racing collections and not likely to escape!  The front-engined Scarab GP will never lack for invitations to prestigious racing events, Concours, and shows where its thunderous exhaust and unique appearance will be the centerpiece of any paddock display and will draw spectators from far and wide to its on-track performance. 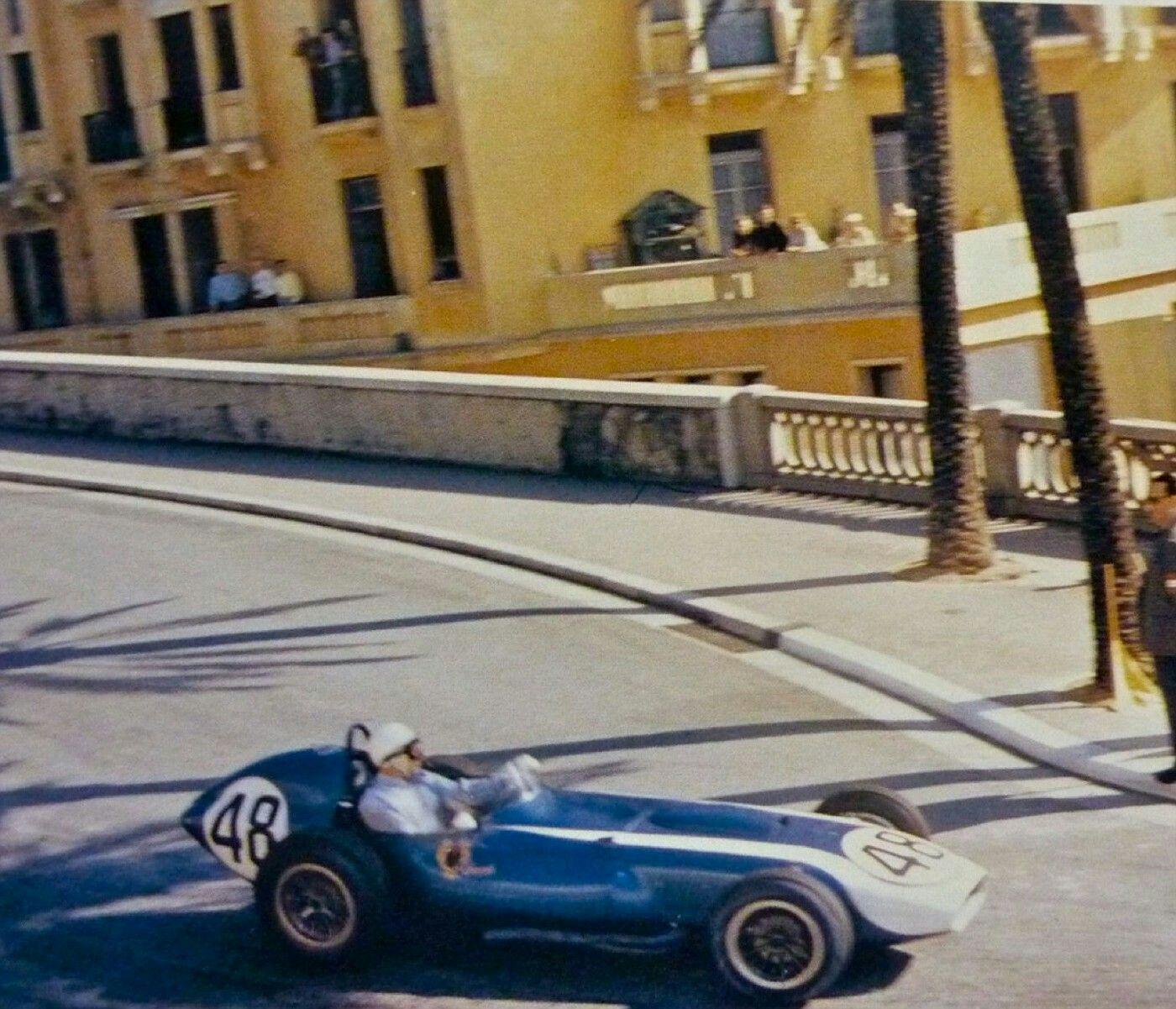 Young Lance Reventlow’s Scarab team was on top of the world at the end of the 1958 season. Fueled by his mother’s money and thanks to the hotbed of gearhead car culture in Southern California and the infamous withdrawal of all the American manufacturers from motor sports competition, the 22 year old Reventlow had managed to pull together a once-in-a-lifetime talent pool of hot rodders, oval track builders and sports car types.

A privileged and ambitious young man who was used to getting what he wanted, Lance Reventlow decided that his goal was to have the best damn racing car in the world and based on the Scarab sports car’s overwhelming success, there seemed little doubt in his mind he could do it. No question the Holy Grail of road racing had to be Formula One. The seductive, patriotic fantasy of taking on Europe’s best with a homegrown American challenger must have seemed irresistible. Lance set his sights on Formula One.

Leo Goosen of Meyer-Drake fame was chosen to conjure up the 2.5 liter engine and, given his wealth of experience with the famous Offenhauser powerplant, it is no surprise that he settled on a Hilborn-injected four-banger designed to be laid on its side to keep the weight and frontal area low like the latest generation of Indy roadsters. RAI also chose to copy the championship winning Mercedes-Benz Grand Prix machines of 1954 and 1955 and employ a complicated desmodromic valve gear that opened and closed the valves with positive cam action rather than relying on conventional valve springs.

The first race was at Monaco, a tight, twisty, difficult circuit that favored the nimble rear-engined cars and made the Scarabs look lumbering by comparison. Driver Chuck Daigh and Reventlow struggled to learn their way around the little principality, all the while battling a brake pedal that would suddenly and mysteriously plunge all the way to the firewall, then seem fine when checked over in the pits. .” Reventlow even asked Stirling Moss to take a few laps to see what he could do. Moss was arguably the best driver in the world at the time, as well as an acknowledged master of Monaco, and he quickly lopped four seconds off Daigh’s best time.

Ironically, the final race of the 1960 season, and of the 2.5 liter formula, was the United States Grand Prix at Riverside in November. There, on his home turf, Daigh put in an incredible performance in his Scarab.

The two front-engined chassis (GP-1 and GP2) headed in decided apposite directions. Chassis GP-2, the car presented here, went back across the Atlantic with an improved version of the desmo engine to contest – and moreover support – the first few races of the 1961 Intercontinental Formula in England. At a very wet Goodwood, Daigh held an amazing third overall for a few laps before finishing 6th. He then took 7th in the rain again at Silverstone, but crashed hard at the next Silverstone meeting, writing off GP-2’s back end and putting himself in the hospital.

THE RESTORATION OF SCARAB GP-2

After Chuck Daigh’s serious crash in the 1961 Silverstone Intercontinental Formula race the remains of GP-2 were shipped back to RAI in southern California. Most of GP-2’s parts that had originally belonged to Reventlow were collected from former RAI/Shelby employees within 75 miles of the old shop in California. These are documented to include the complete front suspension with uprights, A-arms, shocks and springs as well as the original steering rack and anti-sway bars. For the rear the right upright and the shocks and springs as well as two road wheels were obtained. Other major original parts included the gas tanks, radiator and numerous engine components and all of the aluminum body panels, except for the crashed tail section – i.e. long and short noses, cowling with racing mirrors, left and right side panels, both front cowling panels and the hood, resplendent in its original blue finish and hand painted Von Dutch insignia.

The actual “desmo” engine that powered GP-2 in its first 1960 season was acquired from California enthusiast Ron Kellogg along with various blueprints and documents. With the engine acquisition, the partners concluded that they had now gathered all of the significant parts of GP-2 that had survived Daigh’s 1961 Silverstone crash. The professional restoration, begun in 1988 was to take the better part of a decade due to the Complexity of the Scarab’s design and construction. Original chassis fabricator Dick Troutman brought out the original drawings and specs and reconstructed the structure on the Reventlow chassis table that was still in his shop. Further chassis work, suspension and drive train components, were provided under the guidance of original team member Chuck Daigh. Later Daigh, a consummate motor engineer as well as a world-class driver oversaw the rebuild and dyno-tuning of the original “Desmo” engine now in the car. Numerous written records document the restoration of GP-2.

A most interesting and positive footnote to the GP-2 story occurred during Chuck Daigh’s painstaking rebuild and dyno-tune of the desmo engine. “They’d put in some clearance to keep the valves from breaking as things heated up and expanded, and trusted to compression to hold them shut,” says Daigh. This affected the original engine’s breathing on the intake stroke, reducing its power output, but Daigh’s newly built and properly adjusted desmo engine reportedly pulled a strong and healthy 265 horsepower on the dyno. “It wasn’t enough to make us World Champions,” he says matter-of-factly, but we sure would’ve looked a hell of a lot better than we did.”

Grand Prix cars nowadays are designed on super computers and built by machines out of composite materials, the names of which for the most part, are unpronounceable. Just try to count the number of scientists in your average GP teams pits today. Even the drivers have been almost reduced to button pressing robots because of traction and brake control, sequential gearboxes and other technology. GP races are more often than not, won by a pitcrew who can deliver a sub-eight second stop for fuel and tires.

What a contrast this presents to the era of this Scarab Grand Prix car. Its chassis was drawn on a manual drafting board by one man with the 2H pencil as was its body design sketched by another with the chassis welded up on a chassis table from chrome-moly steel tubing by a third. These included well known by name and individual reputations as the very best in the specialties of their choosing. The list reads like a who’s who of California car culture; Lance Reventlow, Wayne Olsen, Phil Remmington, Ken Miles, Jim Travers, Frank Coons, (Traco), Leo Goosen, Chuck Pelly, Emil Deidt, Chuck Daigh and Von Dutch, the famous pinstriper and artist. Even the drivers who sat in GP-2’s racing seat during its short career in the period are well known – Stirling Moss, Lance Reventlow, Chuck Daigh and Ritchie Ginther.

History is a continuing phenomena and GP-2 is now ready to create its next spectacular career in current historic racing for an astute new owner of perhaps the ultimate 1960s American racing icon – the Scarab Formula One race car.

How Dr. Nobles came across the car: Racing in Europe in both the Ferrari F1 Dientes and in the Masters Formula 1 Historics and in the Formula Jr’s and as he was racing in Europe, he wanted a competitive car in each one of the different venues. When he looked at the 361 Class of Formula 1 race cars there were 2 cars winning every year – Ferrari Dino – tried to buy but owner still will not sell to this day and the one that kept beating the Ferrari was Julian Bronson who was driving a Scarab which is the first ever American Formula 1 car.

Only 3 in the world.  Only 2 were ever raced in period.  Julian racing the car that was never finished. Changed front engine to rear engine in 1960 or 61 ???

This Scarab Raced by Chuck Daigh and Lance Reventlow – playboy, wanted to be a race car driver started his own company called Scarab and built 3 formula 1 cars and 6 GT cars and he himself raced this car.  This is #2, the one that we have.

#1 was owned by Don Orosco who recently passed away.

The car itself, in period, wasn’t competitive bc of an issue with the engine which was later resolved and then became extremely competitive in the historic races.  Also raced in Goodwood, has great Pedigree.  2008 driven in Goodwood.

When current owner found it, it was in Riverside at the Riverside Raceway in a museum.  Bought from owner right from the museum (Riverside International Automotive Museum) where it was on display. Been kept as a showpiece.  It is unique in that it still has the original desmodromic engine that was built in Los Angeles (none of the others have this).

Car was crashed.  When the car was restored, it was professionally restored – many team members who originally built the car along with Phil Remington helped restore vehicle. Under the hood are the signatures for the many people who had a hand in restoring the car.

Over 20 vehicles have come in to both locations, so don't miss your chance on taking one home today!

Over 20 vehicles have come in to both locations, so don't miss your chance on taking one home today!